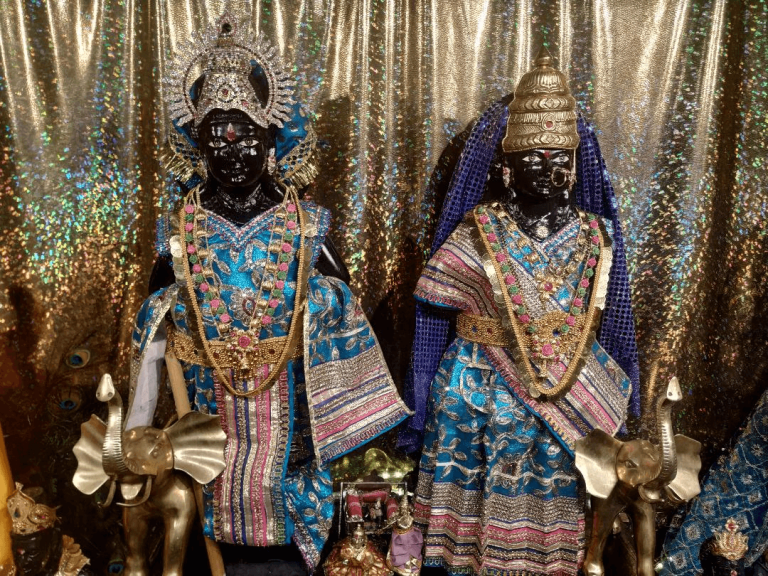 Once upon a time there was a devotee of Lord Vishnu, called Pundalik. He was living with his wife and parents Janudev and Satyavati, in a dense forest called Dindirvan.
Pundalik was a devoted son but soon after his marriage he began to ill-treat his parents. To escape from this misery, the parents decided to go on a pilgrimage to Kashi. When Pundalik’s wife learnt about this, she also decided to go. She and her husband joined the same group of pilgrims on horseback. While the son and his wife rode on horseback, the old couple walked. Every evening when the party camped for the night, the son forced his parents to groom the horses and do other jobs. The poor parents cursed the day they decided to go on a pilgrimage.

Soon the party reached the ashrama of the great sage Kukkutswami. There they decided to spend a couple of nights. They were all tired and soon fell asleep-except Pundalik who could not sleep. Just before daybreak he saw a group of beautiful, young women, dressed in dirty clothes, enter the ashrama, clean the floor, fetch water and wash the swami’s clothes. Then they entered the inner room of the ashrama, and came out in beautifully clean clothes and passing near Pundalik, they vanished.

Next night he saw the same sight again. Pundalik threw himself at their feet and begged them to tell who they were. They said they were Ganga, Yamuna and other holy rivers of India in which the Pilgrims bathed and washed off sins. Their clothes became dirty by the sins of the bathing pilgrims. “And because of your ill-treatment of your parents,” they said, “You are the greatest sinner.”

One day it so happened that Lord Krishna, the King of Dwarka, while feeling lonely, was reminded of his early days in Mathura. He particularly remembered his sports with the milkmaids, the cowherd boys, and his love, Radha. Though she was dead, he longed to see her again. By his divine powers he brought her back to life and seated her by his side. Just then his queen, Rukmini, entered the room. When Radha did not rise to pay her respect, Rukmini left Dwarka in anger and hid herself in Dindirvan forest. Later, Lord Krishna set off in search of Rukmini. He first went to Mathura, then to Gokul. He met the milkmaids and cowherd boys. They too joined in the search. They went to Mount Govardhan in her search.

At last they reached the banks of the river Bhima or Chandrabhaga in the Deccan. Krishna left his companions at Goplapura, and he himself entered Dindirvan forest alone in search of her. At last he found her and managed to calm her. Krishna and Rukmini came to Pundalik’s ashrama.

But at that time Pundalik was busy attending to his parents. Though he knew Lord Krishna had come to see him, he refused to pay his respect to the god before his duty towards his parents was done. He, however, threw a brick outside for lord Krishna to stand upon. Impressed by Pundalik’s devotion to his parents, Lord Krishna did not mind the delay. Standing on the brick he waited for Pundalik. When Pundalik came out and begged God’s pardon and requested him to remain there for the devotees, Lord Krishna replied that far from being displeased, he was pleased with his love for his parents. Since then the Lord Krishna is present as Vithoba, Vitthal or God who stood upon a brick…

Ashadhi Ekadashi is also known as Shayani Ekadashi (lit. “sleeping eleventh”) or Maha-ekadashi (lit. “The great eleventh”) or Prathama-ekadashi (lit. “The first eleventh”) or Padma Ekadashi is the eleventh lunar day (Ekadashi) of the bright fortnight (Shukla paksha) of the Hindu month of Ashadha (June – July). Thus it is also known as Ashadhi. This holy day is of special significance to Vaishnavas, followers of Hindu preserver god Vishnu. On this day idols of Vishnu and Lakshmi are worshipped, the entire night is spent singing prayers, and devotees keep fast and take vows on this day, to be observed during the entire chaturmas, the holy four month period of rainy season. These may include, giving up a food item or fasting on every Ekadashi day.

It is believed that Vishnu falls asleep (called – Yoga-Nidra) in Ksheersagar – cosmic ocean of milk – on Shesha nāga, the cosmic serpent. Thus the day is also called Dev-Shayani Ekadashi (lit. “god-sleeping eleventh”) or Hari-shayani Ekadashi (lit. “Vishnu-sleeping eleventh”) or Shayana Ekadashi. Vishnu finally awakens from his slumber four months later on Prabodhini Ekadashi – eleventh day of bright fortnight in the Hindu month Kartik (October-November). This period is known as Chaturmas (lit. “four months”) and coincides with the rainy season. Thus, Shayani Ekadashi is the beginning of Chaturmas. Devotees start observing the Chaturmas vrata (vow) to please Vishnu on this day.

A fast is observed on Shayani Ekadashi. The fast demands abstainance from all grains, beans, cereals, certain vegetables like onions and certain spices and all kinds of eggs and non-veg.

Please subscribe to receive news and events via email.
Never miss an Event.